If you’re in or around Cardiff today, then head to the Woodville pub. The last Rose Tinted vintage fair is happening from 3 until 6pm. The girls who run it are passionate about raising money and cheap vintage clothing and they’re promising that, this time, their fair will be bigger and better than previous fairs.
I hope to see you there!

Last week, I attended the Oxfam Boutique’s fashion show which they held in celebration of International Women’s Day. As part of it, they held an auction to raise some funds for the cause, with a dress donated by Alex Jones from the One Show, as well as holding a raffle with prizes donated by local companies. There was entertainment from local poet/comedian Mab Jones, who, I must say, was incredibly talented, as well as music from Ellie Makes Music, not to mention the fashion show itself. Students from Coleg Morgannwg were given unsaleable clothing from the shop to transform into wearable items, which are now once again on sale in the shop. The ultimate in recycled clothing.

Here are a few photos from the evening: 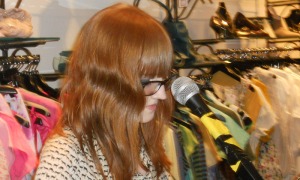 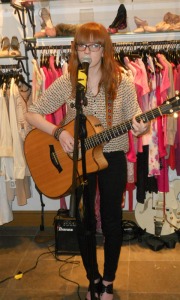 Decorations (which I helped make) in celebration of International Women's Day

A dress, donated by Alex Jones, for the auction at the Oxfam Boutique

And, just to remind ourselves why we’re celebrating and campaigning for equality for women, here’s a lovely video: